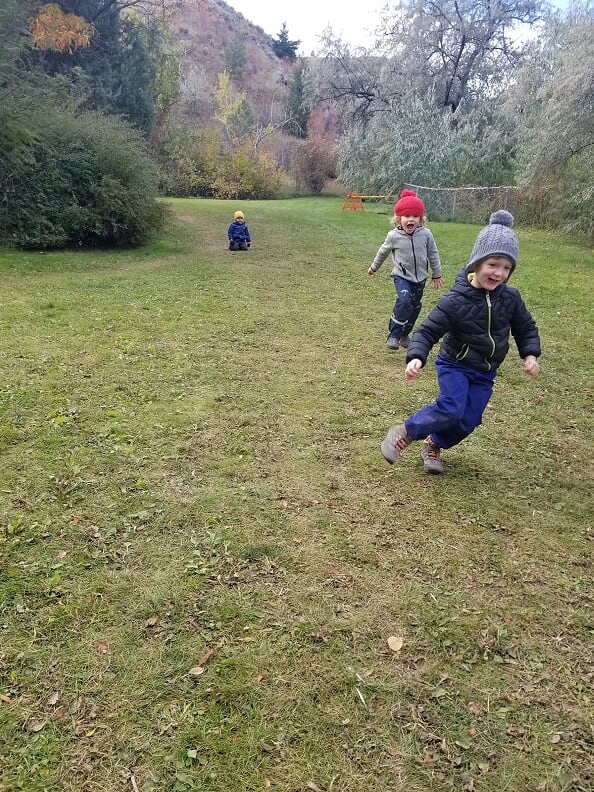 What is rough and tumble play? and why is such a hot topic in Early Childhood Education these days?

Rough and tumble play is what we call it now, but you’ll probably recognize it better by it’s other name: play fighting. Fighting?! you might be thinking, at preschool?! Yes!

How can play fighting be important to your child’s development? Let me share with you how most of our mornings start at Sprouting Knowledge.

In one’s and two’s, the children run across the bridge, bright sunny smiles and shy grins and sometimes even laughter heralding the start of another day of preschool. As always, the picnic table is set with items to invigorate and inspire the children’s learning and they are always eager to see what a new week has brought. However, inevitably, one child or another looks at their friend with sparkling eyes and shouts out, “catch me if you can!” and they are off. Away from the table, away from the nature museum. They run through the field, crawl under bushes, chase and catch. And pull, and push, and wrestle.

Now as much as we encourage all children to explore all sides of themselves, it is an undisputed fact in early childhood education that boys will seek out this kind of play with more fervor and more regularity than any girl. And inevitably, that is what we see most mornings. Perhaps this makes you nervous, perhaps you’re concerned about safety, and aggressive behavior and future problems with physicality. And let me tell you, us teachers feel the same way! It is ALWAYS a challenge for us to recognize and maintain the line that is comfortable for us, while also allowing the children to engage in this play they so obviously, desperately desire. But I’ll tell you a secret that I’ve found, as a teacher and as a mother. If you’re feeling uncomfortable, I can almost guarantee that you’re a woman. I know that from my experiences, I don’t play with my children in a rough, physical way and I never have. But do you know who does? who’s always ready to wrestle, and (gently) toss and tickle and chase? Their father. This is how boys tend to play, and it’s scary for us to allow. We’ve been taught to fear their physicality, to encourage gentleness when they yearn for rigidity and pressure. We fear that aggressive behavior exhibited now will mean aggressive behavior when they’re grown. I don’t know a single parent who isn’t striving to raise kind, gentle, loving children. So how does encouraging play fighting fit into that narrative?! Let’s take a closer look at our morning.

One boy is running, full tilt, followed close behind my two more. He keeps turning his head to watch for his pursuers, but his watchful gaze is turned in the wrong direction as he’s taken by surprise by a fourth boy who jumps out from a bush and crashes into the running child. Both children fall to the ground with giggles. In second, they jump back up and turn on the boys who had been chasing the first child! Howls of laughter follow behind them. Two other children are locked in a wrestling match. One shoves at the other child and knocks him down. He pauses while the other child pulls himself upwards and they begin again.

So what does this show us? What is valuable here? We can see rough and tumble play encourage children to develop strong physical skills. They practice running and jumping. They’re developing their proprioception (the sense that tells them where they’re body is, even when they can’t see it or aren’t looking). They are learning to gauge their own strength and speed. They are recognizing the body language of the other children and learning how to regulate their reactions. This is also a springboard for children to develop strong communication skills and a precursor to collaborative play, where they are engaging their imaginations in purposeful play with intention and meaning behind it. However, like most skills a preschooler is learning, they aren’t learning them all on their own.

A child comes running from around the bushes. Their grin is gone and there is a glint of fear in their eye. Krystal, who has been keeping a close eye on the game, quickly intercedes. “Wait! Child A, have you checked in with Child B to make sure he’s wants to play this game with you?” and with that little prompting, Child A immediately stops his chase and repeats a well known script. “Child B do you want to play this game with me.” Child B shakes his head and says “No!” And Child A says, “Ok” and wanders off to find a child who wants to be chased. Or perhaps two children are wrestling and one of them grabs onto another child with force and pushes them to the ground. The grim determination on the child’s face is hard for me to read, so I step in quickly and remind the child on the ground to “tell ____ that you don’t like that if you need too.” Quickly the child responds, ” No, I do, we’re just playing a game.”

With responsive caregivers in attendance, this kind of play gives the children scripts that encourage clear communication. We watch with careful attention for smiles, giggles, frowns, concerned looks, and are always on alert for potential injury. Questions like “do you want to play this game?” are normal and nearly rote. Conversations that start with “Stop, I don’t like that” and “I don’t want to play it like that” are common and everyday. With guidance and the freedom to engage in this play, the children are learning what they like and how to speak up for themselves. They are learning how to compromise and negotiate in their play and how to resolve conflict when they are in disagreement. They are also learning to check in with one another when play goes a step too far and child is bumped harder than they meant to be, or the wind is knocked out of them, or the thrill of the chase suddenly became terrifying. We call the children’s attention to body language and facial expressions. “Are you OK?” They are learning to stop and assess.

It doesn’t happen right away, but with encouragement, freedom, and careful guidance rough and tumble play becomes a vitally important element in children’s development and can lead to wonderful moments that we treasure witnessing.

“Stop that. I don’t like it!” says a child firmly. The other child is still grinning and reaching for the child’s jacket but the first child stands his ground. “Stop!” His firm words and frowning face break through the other child’s focus on continuing play. His hands drop and his grin falters. He stops running. “Ok” he says. He looks a little lost and a little sad. The child who halted play is a favored playmate and his disappointment is palpable. The first child doesn’t really want to stop playing, but he doesn’t like this particular game. “I don’t like it when you push me. How about we can wrestle, but on our knees?” The second child’s face lights up again with a wide grin. “OK!” he agrees. The children lower themselves to their knees and the game resumes, with giggles and smiles and happy faces until it comes to it’s own natural end and the children move on to something else.